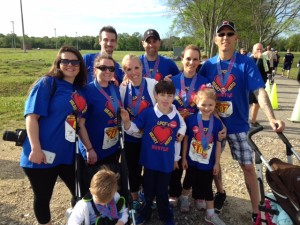 Harrison was born on Wednesday, July 27, 2005, in Baton Rouge, LA, as what we thought to be a perfectly healthy child. On Friday, we were set to go home. The doctor had to release Harrison first. While examining him, she noticed that his fingernail beds were a bit cyanotic (blue). She ordered a chest x-ray and checked his oxygen saturation, which should have been 100. Everything was fine, and she informed us that the room was very cold, and that was probably the reason for the blue appearance in his nailbeds. So we were free to go. While packing to leave, the doctor came back in and informed us that there was something in her telling her to do one more test. At that time, she ordered an echocardiogram (an ultrasound of his heart). The technician came in, and quickly left. A few minutes later, the Neonatal Intensive Care Unit nurse practitioner came in and explained that Harrison’s echo was not normal, but she could not tell us why. However, she did tell us that she would have to take him to the NICU immediately to give him medicine intravenously to keep his Patent Ductus Arteriosus (PDA) open. This is what babies live off of in utero. We were devastated.

Five hours later, we met Dr. Michael Brumund, the cardiologist. Little did we know that he would soon become our lifeline. He explained that Harrison was born with a very severe Congenital Heart Defect called Hypoplastic Left Heart Syndrome Variant, or HLHS. This meant that the left side of his heart was underdeveloped and way too small to sustain life.

He then presented us with three options:

Without a thought, we chose the three stage surgery, the first of which would need to be performed as quickly as possible. The best place to go for this surgery was Boston, MA. However, Harrison was not stable enough to fly on a commercial flight, so would have to be flown by air ambulance to Boston. By Sunday, we were flying over 1500 miles away from home, with little time to research, so we knew very little about Harrison’s condition.

Upon arriving, we were admitted to the Cardiac Intensive Care Unit at Children’s Hospital Boston. On Monday, Harrison underwent balloon dilatation of his aortic valve through cardiac cathiterization in hopes that increased blood flow would help his left ventricle grow, and possibly help him to (someday) have a two ventricle heart. On Wednesday, August 4th, at just one week old, Harrison underwent his first open heart surgey. This was the Norwood Procedure, Blalock-Taussig shunt and EFE resection in hopes to grow his left ventricle. After the surgey, Harrison did well. Two weeks later, he began to run a very high fever. After many tests, we found out that Harrison had contracted a staph infection in his blood and would need to be on 14 days of IV antibiotics. One week later, we were flown home by air ambulance once again. Upon arriving home, we were admitted to Our Lady of The Lake Children’s Hospital to finish his antibiotics, and work on his feeding issues. After one month in the hospital, Harrison was still having feeding issues, and the cardiologist decided he would need a feeding tube to help him gain weight. One week later, we went home.

After being home for two nights, we were readmitted to OLOL Children’s Hospital for issues with his feeding tube. Three surgeries and five weeks later, we were sent home. This time, Harrison remained home for two months.

At four and a half months old, Harrison’s oxygen saturation started dropping rapidly. On Thursday, December 8, 2005, we went to the cardiologist with a very blue little Harrison. That day we were admitted to OLOL Children’s Hospital, where many tests were performed to try to figure out the reason for his very low oxygen saturation. After finding no answers, we made the decision with our cardiologist to travel back to Boston for the Bi-directional Glen. We flew by air ambulance once again and arrived there on Saturday. That night, a heart cath was performed, and the doctors found the problem. Harrison’s shunt was clotting. After several attempts at opening it with a stint, he was placed on ECMO (extracorporeal membrane oxygenation), which is a machine that performs the work of the heart and oxygenated his blood for him. Two days later, the Bi-directional Glen was performed. Harrison came back from surgery off of ECMO. The recovery from a cardiac status went just as planned.

Harrison did well for the next year. Although he has experienced developmental delays, he is catching up rapidly. Recently, Harrison’s sats started to drop again. After two weeks in PICU at OLOL Children’s Hospital, Dr. Brumund made the decision that we were ready for another air ambulance trip to Boston. After, being in Boston for two weeks, Harrison’s sats started to improve slightly. With no answers as to why this was happening, we were sent home. After a few more episodes of oxygen saturation dropping into the fifties, the decision was made by the doctors in Boston to do the Fontan, the third and hopefully final surgery. We are waiting on the exact date, but hopefully, it will be in May 2007.

We recognize that God has so graciously blessed us with this incredible little boy and have complete and total faith that He will take care of him. He has given us good doctors and surgeons in Boston and a great cardiologist at home. Our pediatrician is also a Godsend, and our family could not ask for anything better. We trust God completely and know that He has His hands on Harrison’s doctors and everything will be alright.