Spiritual warfare is no past time engagement; it is a full-time pursuit and battle for the expansion of the Kingdom of Righteousness and a defensive stance in maintaining territory already gained.

We, who are soldiers in the army of Jesus Christ are commissioned by our Commander in Chief to fight the good fight of faith defensively and offensively. Paul said in his writings to the Philippians, “I am set in the defense and confirmation of the gospel.”

I believe two of the most powerful truths in the Bible are, 1) no weapon formed against you will prosper, and 2) no evil will overthrow you. Yes, weapons will be formed, and evil will try to prevent your victory from taking place. But because the word says no to these two, we stand protected and assured of victory in battle. 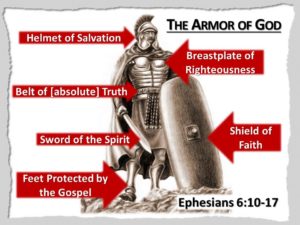 Spiritual warfare is not just about our self-survival in a world gone bad, but for a depraved world that needs a Savior. If there has ever been a time in the history of mankind’s existence, it is now that the Church needs to arise to the battle hymn cry that Jesus Christ is Lord, and there is healing in His wings. Today is that day.